Route Description: Uncle Dad climbs a severely overhanging prow/buttress on the central/left side of the west face of Hillbilly Rock. It has two possible starts, forming a Y to a shared finish. The left start follows a right-trending weakness/purple band in the wall that leads right from the lower, vertical rock on the proposed climb (May cycle 2018) Horsefly Hootenany onto the prow before heading directly up a flat, featured headwall. The right, more direct start begins on a vertical face then climbs a series of right-facing overlaps/corners along the prow itself, joining the left start at a jug feature below the upper headwall. Both variations are approximately 100 feet long and will stop at the top of the wall. 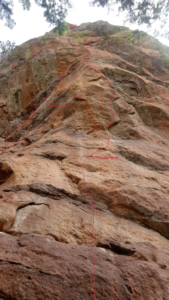 A description of existing routes on the same face of the rock formation, including the number of routes, route names, route grade, type [traditional or bolted], and approximate distance between routes (a photocopy or diagram of the existing route(s) is also required): The west face of Hillbilly Rock has two existing climbs, both 5.12. The leftmost one (West Face 5.12c) is located down and right 30 feet from the proposed line, and the second (rightmost) route (West Face Right; 5.12a) is located another 50 feet downhill near the southwest margin of the wall. Both are sport climbs, though West Face Right does have some moderate traditionally protected climbing to reach the first bolt. There is also the proposed (May cycle 2018) climb Horsefly Hootenany, a 5.13- about 25 feet left of the proposed climb Uncle Dad, and which—pending OSMP approval—will go in in late-summer 2018. chaeopteryx follows a left-facing corner and this route stays right of a blunt arête to the right of the Archaeopteryx corner. 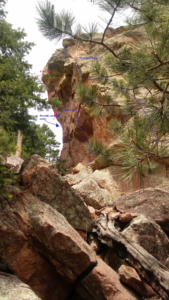 A description of the approach (include approximate distance from the designated trail system, existing “social” or undesignated trails leading to the climb and condition of the trail, and state whether there is a durable surface, such as rock. Include photographs of the approach.): The approach is via NCAR. Take the Mallory Cave Trail to the Mesa Trail, head south to where the Mesa Trail traverses Skunk Canyon. Head west into Skunk Canyon on the climber’s approach trail, passing under The Guardian, then head due north up the gully between Hillbilly Rock and Ridge 1 to reach the west side of Hillbilly Rock on an existing climber’s trail. The trail is on durable, hard-packed dirt and talus. 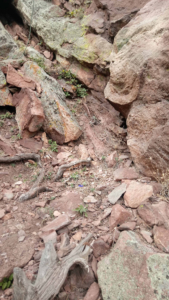 Has all reconnaissance work that can be reasonably done, short of placing any hardware, been done? The route has been inspected on toprope as best as possible, given the limited anchor availability directly above it and the steepness of the wall, lack of directional gear (there are no cracks on the lower sections), and proximity of tall trees (dangerous for toproping) behind the line.

Has the route been top roped? Is there loose rock?  Is it extremely overhanging? The route itself has not been toproped due to the constraints listed above and will only be safe to toprope once top anchors and at least a handful of directional bolts—removable or otherwise—have been placed to stay into the wall, to obviate the hazard of a perilous swing into trees behind the route, given its very overhanging angle. The line has a few flakes on the left start, in the purple band, that need to be removed, but is otherwise on clean rock. The line is extremely overhanging – 20 to 30 degrees.

Additional notes: This route will be a great addition to the face, and is the longest, most difficult line on the best stone on the wall. The left start to the shared finish is likely hard 5.13, while the right start appears to be 5.14, though further exploration (using the bolts on the shared finish above and maybe one more directional bolt below) is needed to be sure it’s featured enough on the right start to justify bolting this variation. If it’s blank down there, I won’t bolt it. I am, however, confident that the left start goes.