Sis-Wife climbs the vertical to then very overhanging panel of rock right of the existing route Neph Son in the middle of the West Face of Hillbilly Rock—it is 10 feet right of Neph Son and 20 feet left of West Face (5.12c). The line climbs a hard boulder problem off the ground to a scoop/ledge, then moves up sustained, gently steepening terrain into the roof bands that cross the wall. Here, the route moves through the first roof via a scoop and layback flakes, then proceeds up the very overhanging headwall above before moving right across a final arête to finish along a well-featured layback corner/flake. The anchors will be at the lip of the wall, before it rounds over to slabby terrain. 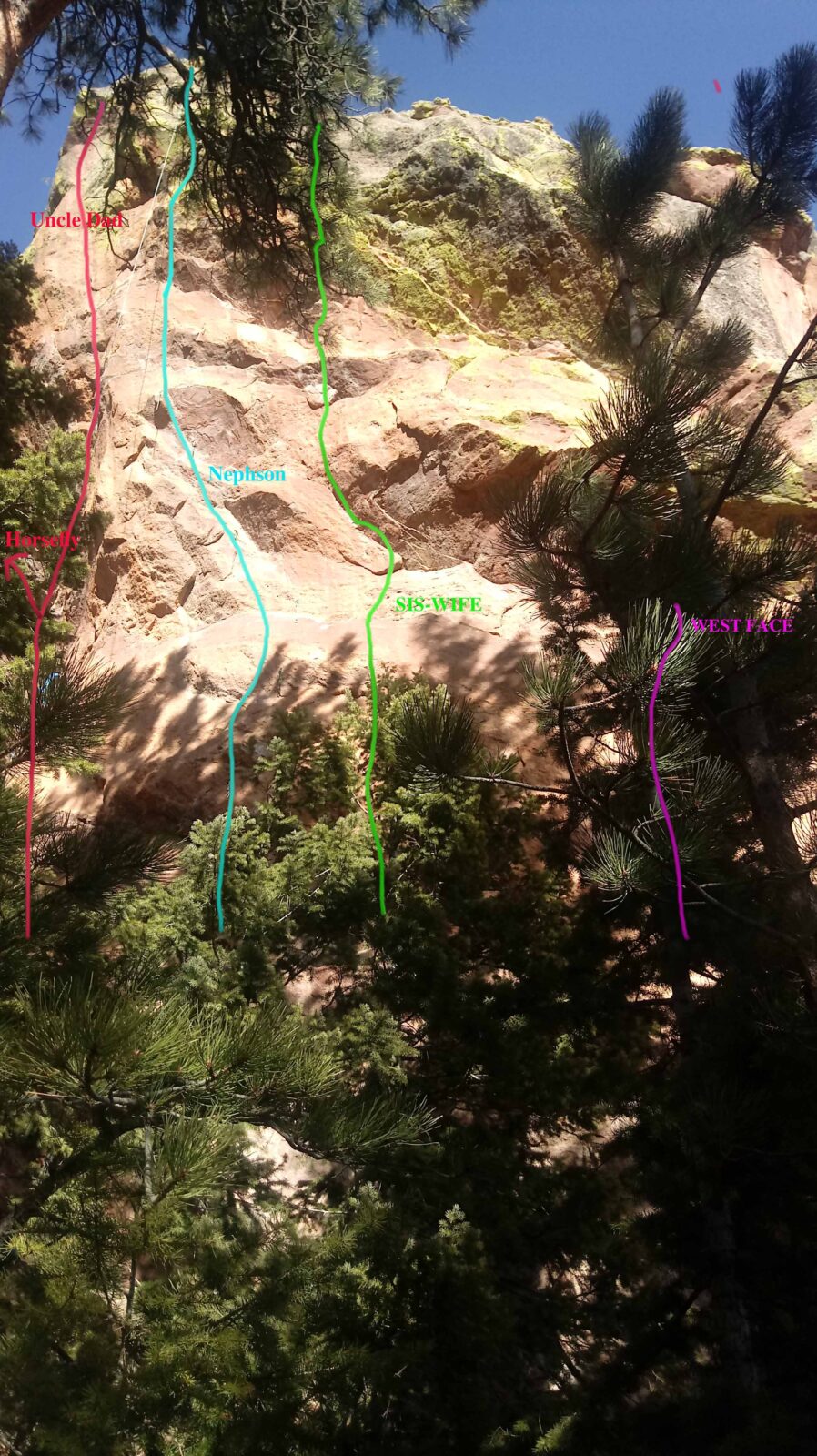 The west face of Hillbilly Rock has five existing climbs. The leftmost one is Horsefly Hootenanny, a 5.13- on the upper left side of the west face. Then there is Uncle Dad (5.13b), which branches right off of Horsefly. Right again is Neph Son, which moves up the prow in the middle of the wall, 10 feet left of the proposed climb. West Face (5.12c) is located down and right 20 feet from the proposed line, and the rightmost route (West Face Right; 5.12a) is located another 40 feet downhill near the southwest margin of the wall. All are sport climbs, though West Face Right does have some moderate traditionally protected climbing to reach the first bolt.

Approach Description: The approach is via NCAR. Take the Mallory Cave Trail to the Mesa Trail, head south to where the Mesa Trail traverses Skunk Canyon. Head west into Skunk Canyon on the climber’s approach trail, then, 100 yards into the canyon, head due north up the first gully, between Hillbilly Rock and Ridge 1, to reach the west side of Hillbilly Rock on an existing climber’s trail. The trail is on durable, hard-packed dirt and talus. 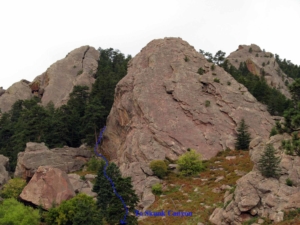 Descent Description: The descent is via lowering off the route back to the staging area, and via the approach trail.

Base Area Description: The staging area is a rock ledge against the wall, with compact dirt and rock behind it as you move slightly out from the wall. 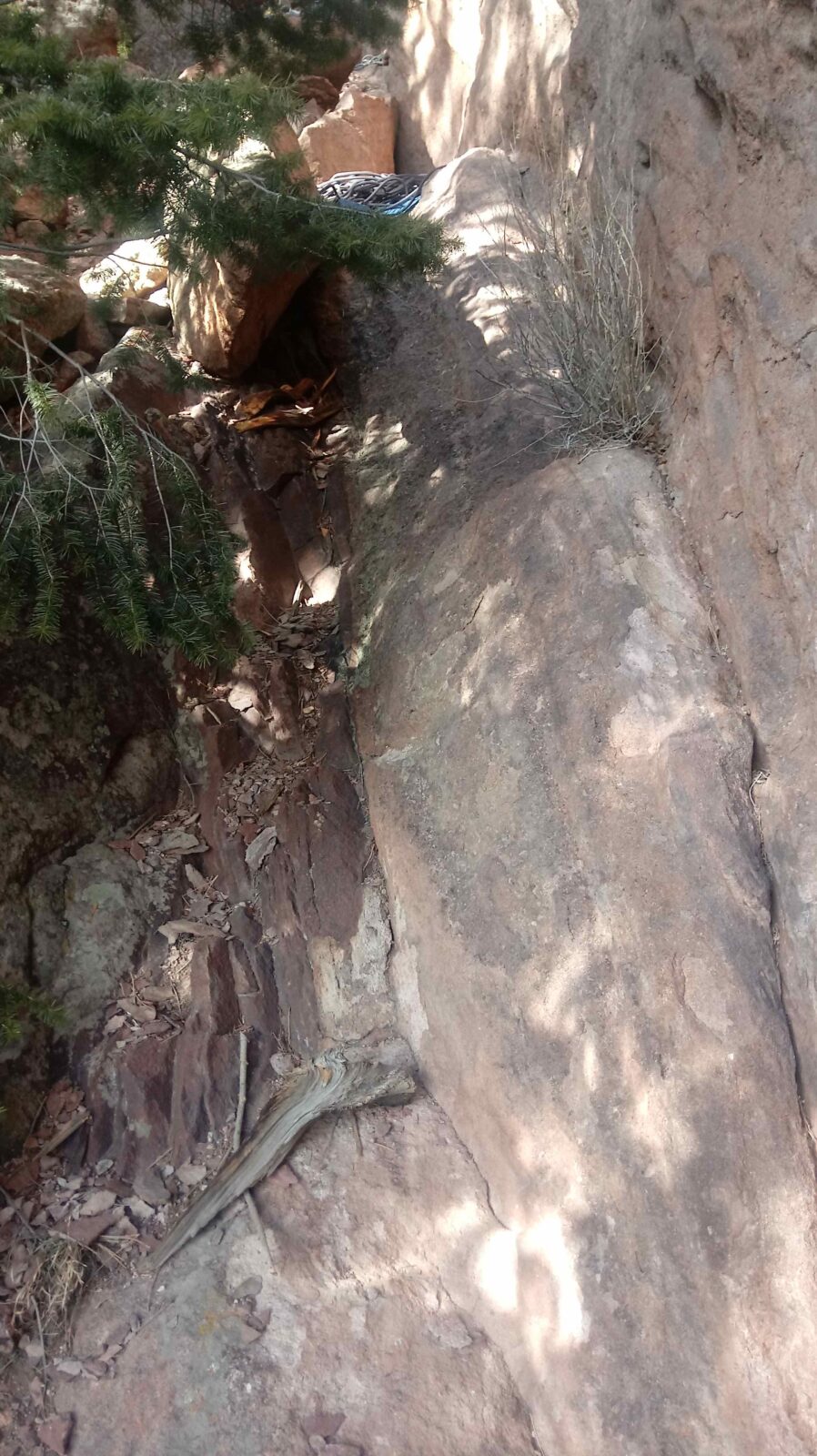 Description of Route Evaluation Efforts:  The route has been inspected on toprope and rappel as best as possible, given the steepness of the wall, lack of directional gear (there are no cracks on the lower sections), and proximity of tall trees (dangerous for toproping) behind the line.

The route in its entirety has not been toproped due to its very overhanging angle, lack of directional gear, and the presence of trees behind the wall you could swing into. It has, however, been inspected multiple times, including on rappel and from the neighboring climb Nephson, and some moves have been completed on toprope on the upper section. The estimated difficulty is 5.13. The line has a few flakes in the first roof band that will that need to be removed, but is otherwise on clean, solid rock. The line is extremely overhanging – 20 to 25 degrees.

Additional Notes from the Authors: none